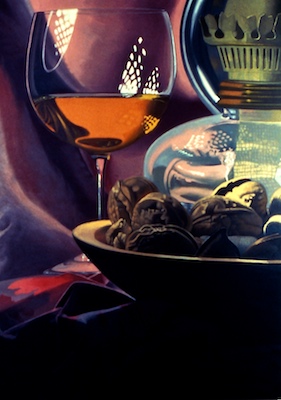 “I decided to paint a series of sections of the still life (Autumn Tableau #1) enlarged to the size of the first painting. I began on the left side of the still life, on a 5-foot, 10-inch, by 4-foot, 3-inch canvas (which I later called Prow, because I imagined the bowl of nuts as a boat moving on the dark cloth-waters). For this painting, I lowered my angle of vision so that my head was almost resting on the table top and painted the left half of the bowl of nuts and the hurricane lamp, cropping the scene just above the horizontal top of the wine glass and slightly to its left. As I painted, I realized that, enlarged, the visual events on the table became clearer to me. Because the cropping and the change in my angle of vision created, in some respects, a new situation, my response to its metaphorical significance led me to see the elements differently. The cropping created a new design, and I had to subtly change the shape, tone, and color of each thing to fit the meaning of the new situation.

A still-life, I thought, is like a Tarot reading. You have a more or less random arrangement of cards (still-life objects) which, when interpreted in a certain order, revealed a coherent narrative. Cropping a still-life, I realized, is for me, like laying out the cards. As I study it and live with it, in all of its Realms, I see meaning. I realized that as far back as art school, looking at still-lifes or figures and drawing them, I always felt that what I saw was coherent. The lines and shapes that I saw out there easily formed an interesting design; and the symbolic meaning of the interactions of objects, how they reached for each other, told a story. And all too often, that story had relevance to my life. ”