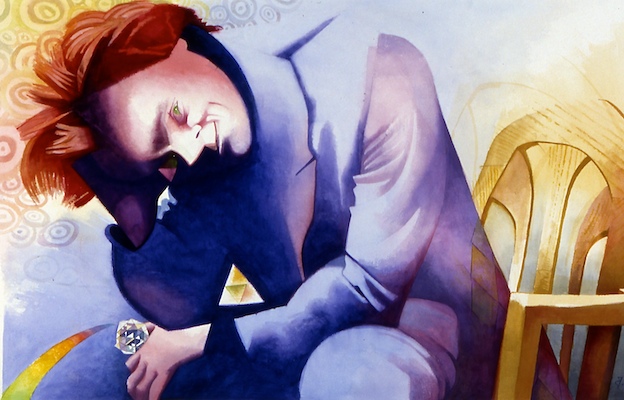 “ I ran across a black and white photo in the Sunday Inquirer of a young actor who was visiting Philadelphia. He had taken a pose, cocky and self-assured, for the staff photographer. I saw in his photo the chance for me to create an archetype of the magician trickster, a character that was always fooling around, a wise, devious, fun-loving guy that was me at times.

I made his unruly hair red, his small, twinkling eye, green, and I put a tiny triangle in the center of his one visible eye. The prism in his hand ties him to the Magician symbol in the series of that name. The facets of the prism are triangular. Diamonds (two triangles back to back) are just barely visible on his suit, as though they were appearing, or disappearing. The space formed by the deep, royal blue that connects arm and leg and background into a sprawling shape is a triangle faceted into smaller triangles. The painting was titled ‘Let Me Introduce Myself’, from the perverse Rolling Stones song, ‘Sympathy for the Devil’. ”